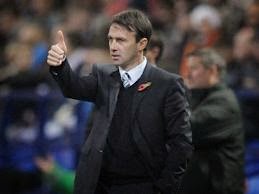 Hopefully with nothing to play for and with their manager too busy dealing with texts containing the starting eleven of other teams Bolton won't be up for much tomorrow. We can but dream eh ?

Tragic Tuesday has led us to be under more pressure for tomorrow's game. There's not much to say about the Barnsley game, I think bullet points is the most succinct way :-
It be good if all of the above is addressed on Good Friday. One good thing is that at least Victor Moses is at Liverpool and not on hand to part the sea of red that we're seeking to create tomorrow.

I've not bought a Charlton shirt for some time but at the time of writing can't find any of the old ones. it's probably immaterial as they probably wouldn't fit any but to be fair it never stopped Peter Garland eh !

I will find something red to wear I'm sure.

For our Easter fixtures it's hard to see eggsactly where any points will come from after the Barnsley debacle. I think we'll need to try and garner at least 2 points from somewhere in these two and at least a win somewhere else even then that may not be enough. It's hard to be optimistic.

Whatever happens I wish everyone a happy Easter that I hope you are able to enjoy the long weekend with your families.