then don’t expect to find any from the PL, the EFL or a majority of well paid footballers.

We know from bitter recent experience just how inept the EFL are and indeed continue to be. Similarly the PL has a comparable track record.

However, we are in unprecedented times and given that, one might think it’s not too much to hope that these particular leopards might change their spots! You fools! The one constant in the ever changing face of daily life is that it’s business as usual for them.

Presented with a pandemic their immediate, short-sighted decision was to postpone football matches for a couple of weeks with their procrastination resulting in that decision only made the day before the vast majority of games were to be played.

Only they could compound that decision by a couple of weeks later deciding to move on to another unrealistic deadline of 30th April. As far as I’m aware this is still the deadline. God give me strength!

Our nation is, save for the key workers, stuck indoors. Therefore, you’d be forgiven for thinking it allows an opportunity to come up with some rational plan for the way ahead. Time enough, even for the good people at those organisations, to produce proposals for a number of potential scenarios.

Their silence is deafening so one must assume that no such plans are forthcoming. Of course not, their overriding objective is to keep alive the hope of ending the season and minimising revenue loss.

There is absolutely no desire to end the uncertainty for players, staff and fans alike by simply writing off the season.

We ought not to be surprised by any of this. For its part the PL was born out of greed. No matter how anyone might want to dress it up that is the reality pure and simple.

At its inception we were told that the aim of the new Premier League was to improve the standard of the domestic game and further, that of the national team. The promised land would make our England team more competitive. Well, we’ve seen just how well that’s gone.

Back in the day when we had smaller squads and plenty more games we were so much more competitive than now. We even had the home internationals offering 3 more games at the end of a long season. All played in a week too if I remember correctly.

Any uncertainty over the avaricious nature of the PL and the majority of the teams in it is being ably demonstrated now. The inaction of many clubs and their players speaks volumes.

Whilst Barcelona’s players have just taken a 70% pay cut to protect their staff, Newcastle United and Spurs have just furloughed their staff. I say staff in the loosest sense of the word as it would appear that the furloughing doesn’t extend to the players.

Why would it? They’re having to struggle on their meagre salaries most of which offer more in a week than the majority of the country earns in a year!

Two clubs with massive assets in terms of players alone are coming cap in hand to the taxpayer. Meanwhile smaller, family runs businesses will go to the wall when a fraction of a PL player’s weekly wage would save them.

I’m not sure this is what the furlough scheme is for.

I keep reading about the need to finish this season to maintain the integrity of the leagues and football in general. A bit too late for late and with every passing day, whatever perceived integrity there was vanishes further into thin air.

Their desire to finish this season is driven only by the financial rewards central to their very being. They don’t want to kill the goose that, upto now, has laid the most golden of golden eggs.

By contrast, those clubs in rugby chasing less attractive eggs are having to cut wages across the board. For them, staff means anyone working for their clubs.

At the same time comparatively wealthy Newcastle United and Spurs are kindly passing the funding and support of its non-playing staff to the tax payer.

Those overpaid players not even doing what they’re paid for ( through no fault of their own I know ) sit at home counting their money as there is little else to do and nothing to spend it on at the moment.

Are the fans of any club expecting a refund on their season tickets when this season is cancelled? As Charlton fans we’ll just be grateful if we have club. No, we’ll have written that off and in many ways given the bigger picture I don’t care.

There are many businesses and organisations dear to me that are going to need support once this mess is over. I’ll quite happily and expect to make donations to do so. Sadly, that’s not matched by football’s elite and wealthy…….a truly damning indictment of football’s governing bodies. 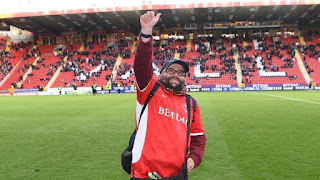 I don't feel that I can add anything to the numerous wonderful and heartfelt tributes to Seb. I just wanted to acknowledge our Number 1 fan and his outstanding loyalty and dedication.

I'd like to offer my condolences to his brother Ollie and the rest of the family.

Like others, I can't see his achievements being surpassed. Seb will never be forgotten and there are several plans to arrange a memorial of some sort which is very fitting.

The past couple of months have certainly been different both for our society as a whole and also our club. Though one would be tempted to argue that for our club events have not been that unusual given our history over the last 40 years or so.

Charlton are never far from a crisis and thus, to an extent perhaps, we oughtn’t to be that surprised by the latest happenings in S.E.7.

It seems that for us, bad owners / chairmen are like buses but even they are red at heart!

Naturally, we hold our time in the Premiership in close affection for what was achieved, enthralling matches, winning against the odds, players that made you proud etc.

More than anything now though we reflect on those days when the only remarkable things were happening on the pitch.

The chairman ( then at least ) was good and saw eye to eye with the management team which was supported. He genuinely cared and wanted the best for the club.

Sadly, it all unravelled like a house of cards following Dowie and relegation and it’s something we’ve never recovered from.

A succession of ever changing and largely hopeless managers barring a couple of notable exceptions certainly hasn’t helped. Owners who hold no real affection or concern for the club and its fans have done untold damage.

It’s been a steady decline punctuated by more than one false dawn. As someone once said “ it’s the hope that kills you ! “.

I guess we should have expected that when Duchatalet was replaced by a seemingly rich benefactor from the Middle East accompanied by a chairman who made all the right noises, it was going to be too good to be true!

Thus it came to pass. Southall has been exposed for what he really is and the odious and deceitful character has apparently left the club. Sadly, like a tenacious bogey, it’s not so easy to part ways.

Southall still has some investment in the club although thankfully, His Excellency’s share, means that he doesn’t hold the overall say and decision making.

Last week’s events were astonishing, even by Charlton standards. It all led to an amazing crescendo on Thursday with some staggering scenes that saw Southall lash out like a cornered animal.

He attempted to fire more people than Lord Sugar! Thankfully, Louis Mendez was on hand to capture our erstwhile chairman as he disappeared into the South London night in his luxury car.

Leaving without comment, Southall demonstrated that his lovely motor might loosen lingerie but certainly not his tongue! For once he had nothing to say.

One hopes we’ve seen the last of him at The Valley or even the training ground.

It’s not ideal but we now pin all our hopes in Nimer with the dream that he has sufficient money with a willingness to invest in order to make our club at the very least sustainable.

The only people that emerge from this sorry saga with any credit are, as ever, the club’s loyal and long suffering staff. Most notably the suspended Chris Parkes, the sacked gang of three and the management team who never let on about the transfer embargo and took the flak for the poor transfer window.

The EFL has again proved to be flawed organisation that really shouldn’t be trusted with safeguarding football’s club, players and fans. How on earth it thought it acceptable to impose a transfer ban and not make that public is beyond belief.

That is aside, of course, from how they apparently sanctioned a takeover telling us all was ok following the usual tests only for that clearly not to be the case!

They along with the Premier League and the F.A. are now entrusted with making decisions regarding this season and future of the domestic game going forward. God help us!

Clearly no football will be played on 4th April or any time close to that. The suggestion to play games behind closed doors is as ludicrous as those organisations!

Players may be fit and virus-free, although that’s unlikely, but more than players are needed! No regard for the officials, physios, stadium staff etc.

Extending the season when players are out of contract really isn’t an option either.

On that basis it seems a non-starter. This week they should decide that all things considered to write-off this season. It’s the only sensible option and I don’t only say that as a fan of a club in a relegation spot.

To promote or relegate any team without the completion of all fixtures just isn’t practical and would open up a whole raft of legal action.

We can but hope that sensible decisions are made for our club and that all the events on a national and local level are sorted we can go back to supporting our club as we would hope!