And In The Second Half They Rose Again..... 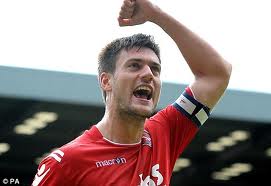 With wonderful religious timing The Addicks rose from the dead yesterday. Another great man whose name starts with a J inspired his 10 disciples to turn around a two goal deficit.

It was looking like a miserable Easter for one and all after 20 minutes as the Addicks insipid display led to thoughts of a proper mauling akin to Christians being fed to the lions ( apologies for that reference ). Skip almost single-handedly led the team back into the game with supreme effort and determination that was  perfectly encapsulated by his goal....he would not be denied !

The first half saw poor performances from almost every Charlton player save probably Skip, Harriott and Solly. Added to referee Kettle's impression of a chocolate teapot it was looking like another miserable Saturday afternoon.

Our boys didn't seem up for it in the opening 20 to 25 minutes and Sir Chris's decision to bring in Hamer, Hughes and Dervite appeared to be a decidedly bad one. The Trotters could have taken the lead earlier than they did as the woeful Ngog spurned a wonderful opportunity. Sordell later showed how it should be done as he turned Dervite inside out before slotting home. Hamer was not to blame for that but he'll be disappointed with the second as Kamara scored with an accurate but tame effort from some distance.

Realising that we really ought to be trying the lads responded and young Callum started to run at Bolton's defence and linked up well with Wiggins on several occasions. Fuller began to use his experience and nous to good effect and later following to strong run saw his cross / shot pass agonisingly close to the goal with no one on hand to provide the finishing touch

Half time and being a goal down with Hughes looking like he was going to lose it I felt he might need to be replaced at half time. Shades of Morrision from earlier in the season I feared, thankfully our prayers were answered in every way !

The second period saw Fuller come into his own and for his efforts, cunning and skill he deserved a goal yesterday. Ricardo has been much maligned by some of late. He remains a quality striker and all his guile delivered us the win yesterday. As ever he was being fouled constantly and got little protection from the ref. I understand he's battling through a shoulder injury too.

Yann's wonderfully taken free kick hit the post and Dorian was on hand to dispatch the rebound. A couple of minutes after winning the free kick that saw Ricketts' dismissal Fuller won us a penalty after a mazy run into the box saw him upended.

Yann confidently placed the ball on the spot for what I believe was his first competitive penalty since the infamous play-off final one. The ball was duly placed into the bottom right hand corner on the net. Very cool, very brave ! All video is to be sent to the King Power stadium........look at what you could have won !

The 7 minutes added on was torture as we're all aware of our propensity to concede late goals this season but in reality Bolton never really looked like scoring. The whinging Davies departed the scene before the final whistle and Knight got a yellow for his trouble as the Bolton entourage lost what little discipline they had.

The Trotters have some good players ( and one particularly bad one, Alonso was truly woeful ) but with their reliance on physical assault as opposed to trying to use the undoubted skills of players like Lee then the play offs will be beyond them unless they encounter some very lenient officials.

A good win then and the Easter eggs will taste all the better because of it. A glance at the other scores yesterday further underlines the importance of the victory. One more win seems essential and two more would make things pretty safe.

Brighton on Tuesday next up then. I'm not going much as I'd liked to as I'm in the midst of moving house and my focus needs to be on that. I'd recommend imbibing at the Gardeners Arms in Lewes for a lovely drop of Harvey's. The Gardeners is a bit like Solly, small with character and will always deliver. A trip to Lewes also gives you the chance to grab a view of the Dripping Pan, the home of Lewes FC.

Good luck to all those who are going and let's hope for another 3 points on the road.

A training ground free kick on Saturday saw young Callum score his first senior goal for the Addicks. All credit to him. He merited another start after his second half display against Peterborough. His ball to set up Jackson for the first goal was sublime aside from all the other good things he did on the night.

Button's clean sheet on Saturday is most welcome especially as it seemed he could have done better with Posh's second goal. Button has deserved his chance and on Tuesday night I was impressed with his punching and catching. If he's coming for it, he's coming for it ! His distribution is also good. I don't think anyone's writing Hamer off, however, it's good to have some healthy competition amongst our keepers.

The four points from the away days at Peterborough and Huddersfield are most welcome if not essential. It will hopefully settle us down and renew the players collective confidence.

Yesterday's cup draw for that lot down the road is excellent news meaning as it does that they replay on Wednesday night. Here's to extra time, sendings off etc. If we can add in some delays on the motorway for their return journey, then all the better.

Another 3 points from Saturday's game will naturally be good for almost every reason. Sadly I'll not be there as I'm moving house next week ( an experience I don't recommend. The whole episode, from start to finish, has been a pain to put it mildly. I may need to go into more detail soon !! ) and I need every moment to complete the move of possessions into storage as I don't enter the new place until a couple of weeks after.

Yann is back available on Saturday and it seems entirely fitting that he should be. If he seeks atonement for his red card last time out at home then helping to put one over on them will do just fine !

Another Saturday, another home defeat. Thus, the seemingly natural order of things in maintained.

I sat in a different position in the East Stand yesterday among some very passionless supporters. Ok, you don't have to go mad but please don't criticise all and sundry whilst refusing to sing or cheer. My mood wasn't brightened by someone criticising Fuller for changing his boots. " He had 2 hours before the game to do that ! " Of course Fuller lacks the experience or wisdom of our friend in the stand. A particularly ironic comment to make when one thinks of Johnny Summers doing the same thing at half time against Huddersfield in 1957.......think we all know what happened next !

No point in dwelling on this one too much, we've all got better things to do ! We started with 3 forwards and were apparently flitting between 4-3-3 and 4-4-2. Obika was woeful and contributed little. For a second week running I'd have made subs after 15 mins having to admit that it wasn't working.

At half time I felt sure that Sir Chris would acknowledge the lack of width and remove the aforementioned  Obika and Dervitte. It was frustrating watch Wiggins move forward with a huge area in front of him with no Charlton player there !

The boss made a few changes with Solly being an enforced one of course. Stephens hasn't been good of late as we know but there is a case of horses for courses and yesterday was one game in which he might have made a difference and flourished. We'll never know now and that he wasn't on the bench wasn't the wisest move either. You do need options.

Last week we had 3 strikers on the bench, this week 3 wingers ! It just don't make no sense !

From last season's settled side we are now chopping and changing all the time and it doesn't seem to be helping. I've not lost faith in Sir Chris, he remains the man for me but he will need to look at the side and try to play a more settled team. Yesterday would have been good to start Harriot I felt and in addition, one of our younger strikers should have been given a go, from the bench at least.

Food for thought ahead of Peterborough on Tuesday. Perhaps Danny Hollands will come back into the reckoning ?

Yesterday wasn't a total waste as we meet 3 Burnley lads and a visiting Leeds fan on the way and met up for a beer after in Greenwich. It was as it should be and we chewed the fat over many football related matters.

Let's hope we can garner at least 4 points form the next two games as that will go a long way to calming out collective nerves.
Posted by Phil at 15:15 No comments: