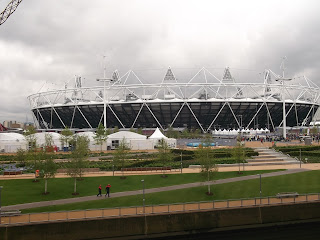 I, and some of my colleagues, took 45 kids to the Olympic Aquatic Centre today and quite impressive it is too, more from the inside to be honest, I'm not keen on the exterior view.

This week has seen the 2012 School Games with school children from all the UK getting the chance to compete in some of the Olympic arenas, how good must that be to a teenager !

A 6.30am coach departure from Milton Keynes saw us arrive there at 8.55am......a long journey when one considers I usually do it to the Valley in about 75 minutes on a Saturday.

We parked in the coach park but it took a further hour walking to the Aquatic Centre, negotiating security, 45 kids plus 5 adults taking comfort breaks and then taking our seats. The swimming started at 8.45am so we missed a fair bit. Below are some pics from inside. 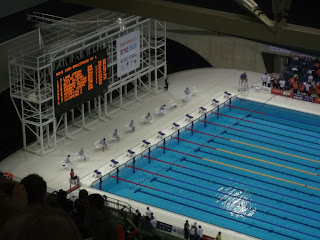 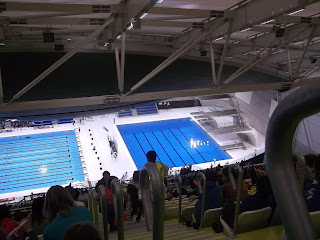 I so wanted to dive into the diving pool. 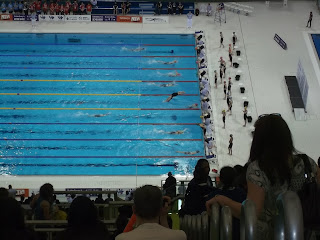 I would have loved a swim in the main pool but you never know if there are any whalers about. This was taken during the 400m relay........I do so hope all the swimmers had 20p for the locker !

I was very impressed with the standard of the swimmers especially those who competed in the 1500m freestyle, 30 lengths of the pool at that pace was quite something. However, the thing that caught my and the children's imaginations the most was a wheelchair bound backstroke swimmer.........how good was he ! He came 6th out of 8 in a very strong field. He left a mark on the kids and I hope they remember his effort and what he achieved for a very long time.

In the lead upto the Olympics and courtesy of my involvement via the school I've been so impressed by the paralympians that I've met and listened too. There's no trace of self-pity or animosity, instead there's resolute good humour allied to powerful determination. Clearly they've decided not to just accept their fate but have sought out new challenges and to make the most of their talent. These are some of the most inspirational people you could ever wish to meet. It is a very, very humbling yet uplifting experience.

Sport offers so much on so many differing levels and has the potential to change lives and not just for those at the top of their respective sport. It can do wonders for self-esteem, bring people and sometimes whole nations together. The values, especially the Olympic ones, are those that we should seek promote and instill in today's children.

I can tell you that I see evidence of those values and beliefs every day in most of the children I teach. Despite what the " popular press " might say or have you believe today's kids are by and large a decent bunch with a positive outlook and desire to do well and be the best they can be.

I hope that the nation's children can draw inspiration from and will be enthused by both the Olympics and Paralympics because whatever your views on the rights and wrongs of what it's costing, it truly is a once in a lifetime opportunity and we have to hope that the legacy that Seb Coe has always sought comes to fruition. 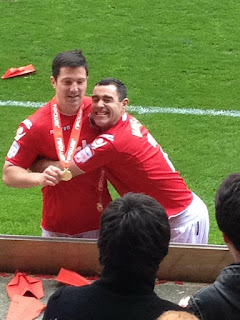 Yann and Andy celebrate in front of the East Stand fans

What a ( long ) weekend. Guess we'll have to stop celebrating soon. Bank holiday Monday couldn't have come at a better time eh ! Myself and my lads were in our favourite curry house last night we got final confirmation of Solly as player of the year. Glasses were raised and the toast was to our excellent right back who's been fantastic this season.

Many players were deserving of the accolade and it's a shame but like the league itself, there can only be one winner. The football league show would have you thinking that it was The Owls who won the league by some considerable margin and not ourselves............little changes. One feels we could win the Champions League and only get a fleeting reference from the media.

Never mind. What a day Saturday was and as ever, Charlton knew how to mark the occasion. Great singers, great atmosphere and the Red Devils falling out of the sky........you've got to admire their courage and skill, how good was that ?

Before the game the Liberal Club was, like most other places, packed and we were lucky to secure some seats ahead of the main rush. An earlier than usual departure meant we were inside the ground in time to catch the pre-match entertainment.

Upon taking our seats I was delighted to find a piece of card and the creative side of me ( no, not childish ) aided by Shepherd Neame soon had me making a plane. My eldest told how puerile I was being so I was delighted to be in increasingly good company as the afternoon progressed with the majority similarly having a go.

It was great to see Sir Chris let sentiment play a prominent part in team selection with the inclusion of Taylor but mostly Euell, another touch of class from the Gaffer.

I can't add to other bloggers in the reporting of the game other than to admit to an embarrassing ignorance of the score. Just prior to Hartlepool scoring we left to go for a comfort break and returned in total ignorance of the goal. It wasn't until 10 minutes, yes 10 minutes, into the second half when my lad remarked that there must be something wrong with the scoreboard. As the " mistake " wasn't rectified in the following few minutes we felt it prudent to ask others if we had missed a goal. Of course, we had indeed.

Now we had consumed a few beers but not so many as to blame that entirely on our not knowing the score. Their goal couldn't have been greeted very loudly by the Smurfs and we had no particular reason to look at the big screen.  Never mind it all worked out in the end with 3 goals of the highest order and all in the wonderful second half spell. The Hartlepool consolation was well deserved. As others have observed, their fans were a credit to their club and were magnificent all day.

The post-match celebrations will live long in the memory as will the final words from Sir Chris. We have indeed got our Charlton back.

Plenty to look back on and forward to and I, like others will no doubt be blogging on that in the close season.

It just remains for me to thank anyone who reads this blog, thank you for taking the time and your comments / thoughts are always appreciated.

Thanks also go to Ketts from Doctor Kish for his insightful blogging and encouragement. I hope that the chip shops in the Championship are of good quality.

Thanks to all the Charlton bloggers. There's such a good variety and thankfully of a better standard than mine and I enjoy reading the differing views and approach that the authors take to those.

As Sir Chris said enjoy the moment and we wait with great anticipation for the season ahead. 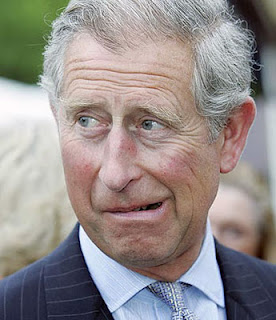 Maybe HRH will pop down to SE7 today to what a promotion party looks like, the poor old chap's been waiting for years to have one himself. The celebrations will be loud but I'm sure Charlie will be able to hear them wherever he may be today.

We've not had a promotion party since 2000 and bugger all to celebrate since sending Palarse down to be honest. Therefore, today we have a right to truly enjoy what has been an astonishing season.  That's it's all been achieved with Sir Chris at the helm makes it all the sweeter.

It's been a remarkable season for so many reasons over and above all the records that have been set and in all likelihood won't ever be surpassed. Phrases like " the team needs time to gel " will be banished to football's Room 101.

There has been so much to celebrate and it's all been made possible by playing decent football with pride and integrity.........all of which sums up our club. You couldn't be more proud of our team and of course, our manager.....what a man ! His shared sense of passion and love for our club really does further endear him to all Addicks. If I felt I could emulate the nifty footwork of the last fan to invade the Valley turf, I'd be tempted to run on and give him a hug today !

Unwittingly today we'll all be doing impressions of Sir Chris by grinning from ear to ear ( sorry your Highness ! ). As far as I can tell the Gaffer has smiled his way through his whole career to date aside from 90 minutes next to Megson's technical area......sometimes even a Saint's patience is tested.

We'd all like a win today but in all honesty who cares and does it really matter. How often have we been to the Valley and not been overly concerned about the result ? Sir Chris boasted that we've had the best plans all season and that even includes one that gives us Monday off to allow for fulsome festivities......well done Sir !

I like many others no doubt, will be quaffing pre-match ale in the Charlton Liberal club.......possibly the only Liberal club that won't have a dark and sombre mood today.

Let's all really enjoy today, celebrate wildly and I know that a tear or two won't ever be far away as for me every trip to the Valley brings back many memories and emotions are never too far from the surface.

You Gotta Fight For Your Right To Partyyyyyyyy ! RIP Adam Yauch