The Problem Of Fatigue 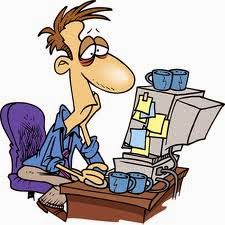 The seemingly never ending run of twice weekly games is starting to take its toll. Sod the players, it's us bloggers that are under real strain !

The challenge to keep commenting on these games is becoming a real strain.......I'm start to flag and I'm not sure I can meet the demands of making sharp observational, witty and incisive comment on such a frequent basis. Hammering away at the keyboard into the wee hours..........it's tough going !

What can one say that is original..............Simon Church is prolific ! How about that ? I've certainly not seen that written elsewhere.

My brief reflections on Saturday are as follows :-

Onto tomorrow night's extremely important game and one that has taken on even greater significance following the wins for Yeovil, Birmingham and the Spanners.

The Glovers are another team who felt it prudent to send one of their loan players back Forest. Miller has followed Tudgay back to the City Ground. It would appear that his attitude was not very teamy and Gary Johnson barely had time to tell him where to go as he walked out of a conversation.

Miller's absence has given a greater opportunity to Tom Lawrence who scored in Saturday's win over Blackpool. Lawrence is quite a good prospect and will need to be well marshalled on Tuesday evening.

As far as our strikers are concerned then I think we need Obika to start possibly with Reza alongside him. Reza struggled to get into the game on Saturday but it should be different against Yeovil.

I think Petrucci is a better player than he is being given credit for. Some are writing him off after two substitute appearances in the first of which he looked quite good and skilful to me. I hope Jose shares my view.

I don't think Jose will make many changes to the starting eleven as he hasn't done so upto now. A bit of minor tinkering seems to be the way and certainly the defence is unlikely to be affected.

We really need to win these next Tuesday games and I hope that everyone including us fans are all up for it despite our collective tiredness.