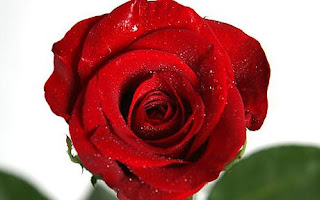 violets are blue,
the Addicks beat Dons,
by one goal to two !
By Phil aged 39 and a half.
On Valentine's night it was a kiss of the Glasgow variety that effectively determined the outcome of the match. For a team called the Dons McKenzie's actions were not those of an erudite nature and he got duly received not one but two cards although not from a loved one.
McKenzie has a history of similar sending offs I understand and perhaps Robinson should have hauled him off once he'd received a yellow card. Young Karl has since remarked that other players try to wind him up.....really ? Well get it sorted or don't pick him then....you do have a choice.
I said pre-match that I'm not too impressed with Robinson.. His decision to remove MacDonald at half time seemed strange since at 2-0 down with 10 men you'd have thought they might as well go for broke.
The Dons played some neat football, even Lewington, had a half decent game. They never really looked like scoring though and they now find themselves on a bad run of form with just the one win this calendar year and that courtesy of an own goal. They'll need to pick themselves up but to be honest I'm not concerning myself with them.
Johnnie put away the penalties with some aplomb as we've come to expect. I hope his apparent injury isn't too bad and that he's fully fit for Saturday. I don't like him on the left but he is an integral figure in our team.
I'm sad to say that BWP had a poor gme. The chances were there and he drew one good save from Martin first half but that aside he never looked like scoring. His form will return, I've no doubt of that but now I think he needs to be dropped to the bench and Haynes should be given a go.
Yann worked his socks off again last night. I'd like to see him get a goal soon, he needs one to but his overall contribution is greater than BWP's whilst I accept they're different types of player.
We were content to sit back in the second half and pass the ball around. Ok to an extent but that does need to be allied to attacking purpose and the balance should be right. We could have come unstuck.
Credit to Hamer a couple of good saves and a decentood claim to come and get the ball from a cross late on. Hopefully he'll take some credit from that.
Other results pretty much went our way and we've extended the gap between us and others in the top six. It's pretty much a case of taking one game at a time now, not for the usual footballing reasons in order to keep focus. No ! This is because with all the upcoming games I'm losing track of who we're playing and when.
Safe to say that I know we're playing Tranmere on Saturday and it's away as I recall the dire game against them earlier in the season. Their only redeeming feature is Ian Goodison......I like him.
If we're looking for omens then I can say we've never lost when I've seen David Cameron before a match. Myself and Clive were on the London Miland train from MK when the PM joined the train at Watford to sit just behind us in the first class section ( I should make it clear that we weren't in first class ).
It was all very low and I had double take as I remarked to Clive, " I'm sure that bloke's someone I've seen on the telly ! ". Well, yes I had of course and I don't think Nick Robinson needs to worry about losing his job as chief political correspondent to me !
I never got the chance to ask him if he was rooting for a red victory later on as he disembarked at Euston.
We now face a number of games in a short space of time and the squad will very much come into play. We will need everyone to be ready, willing and able to take their chance when it comes. Hopefully last night's return to action will have removed some rustiness from our game and we'll continue to march on.
﻿
Posted by Phil at 10:46