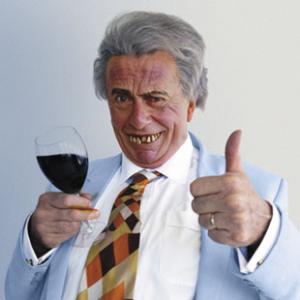 Like our goodselves, Tranmere are also managed by a knight of the realm, it's cultural attache Sir Les Patterson.

Sir Les has done a good job for Rovers since taking over from fellow comedian, John Barnes. The main theme of John's humour was trying to get third tier footballers playing in his own image, something of a non-starter that the Tranmere board quickly recognised by admitting that even the physio could do better.

Sir Les is partial to a glass or two of new world wine claiming that, " I've got a good nose for it and a bloody good throat too ! Results haven't been great of late but you'll not hear me whining if we lose ! Despite our poor run, Wirral together still " quipped Sir Les.

Rovers will take heart from their midweek performance against Carlisle in which they created a number of good chances but failed to convert in a o-o draw. Poor finishing let them down and they'll no doubt seek to improve that tomorrow.

Sadly for Tranmere and me, Ian Goodison, picked up a knock to his calf and is unlikely to play. I'm a big admirer of Goodison so it's disappointing albeit that it means a weakening of their defence.

Rovers have established a sequence of lose, draw, lose, draw ( repeat ad infinitum ) recently. Given their draw on Tuesday we can but hope this continues on Saturday.

Sir Chris may have to do without Skip tomorrow as he picked up an injury against the Dons on Tuesday. If there's any doubt then I feel he shouldn't be risked. We've a lot of games coming up and he's too importnat to our team to be without him for a length of time again.

Maybe Pritchard or Evina will come in if skip doesn't make it. Having completed his ban, I expect that we'll see Russel back in the side soon. I'm sure he'll be a big influence in these next few games as his experience alone should prove invaluable.

The gaffer will no doubt have been thinking long and hard about BWP. He's backed him all the way to date, however, Bradley hasn't looked like scoring recently. He's too good a player not to return to the prolific form we witnessed at the start of the season but I feel dropping him to the bench won't do him any harm. In any case young Haynes deserves an opportunity in his favoured position.

Well done to our youth team on their fine win over Spurs last night. What a performance and their reward, an away quarter final tie at Old Trafford, is well earned.

Elsewhere, I see that Milan Mandaric is rumoured to be interested in purchasing Rangers in order to have a weekend team to complement his midweek one. That'll give the increasingly restless Owls fans something else to moan about. It seems that " the most under-rated manager in league football " is not quite the messiah he was viewed as some 2 or 3 weeks ago. Many Wednesdayites are voicing concern over his desire to play a direct style of football ! Troubled times indeed.

Check out the video from their midweek clash with Stevenage to see the ginger whinger again falling out with the oppo's management team. A touch of deja vu in the technical areas for those that recall he even managed to wind up Sir Chris. It'll all end in tears..........perhaps it'll be the third tier again.

It's turning chilly up north ( no s**t  I hear you cry ) but it seems that temperatures may hold out and the snow stay away for just long enough to complete our game.

A repeat of the 4-0 scoreline we enjoyed in the Barnes reign would be most welcome but an away win of any kind would suit to be honest.

Sadly I'm not going tomorrow and wish good luck and an enjoyable day to all those Addicks that do. I shall be avoiding all media contact until @ 4.45 pm when I shall attempt to find out how we have weathered on the Wrrial.