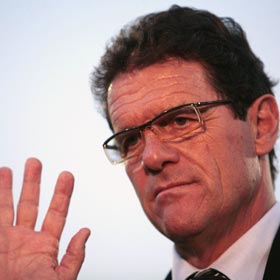 Fabio, who kept Ultravox off the No.1 spot many years ago,﻿ has joined leading bankers by waiving any potential bonus.


When I was a boy just abouta fiftha grade, Mama used to say don'ta stay out alate

Boy it make-a me sick, everyting I gotta do

Boy it make-a me sick, just to make-a lousy bucks

That's it then, Fabio has resigned and in so doing hasn't done any harm to England's chances of success in Euro 2012..........they remain as remote as they ever did. The great disciplinarian needed the FA to make the decision he clearly couldn't or wouldn't having nailed his colours to the mast of S.S. Terry and ironically, in the year of the 100th anniversary of the sinking of the Titantic, he has abandoned ship.

Capello was, like McClaren before him, a ludicrous appointment from start to finish. For me he's always had a rather hapless appearance and a somewhat comic persona which I'm sure is unintentional but only serves to make it funnier. We were led to believe that he was tough on discipline. He later went on to restore the skipper's armband to Terry having removed it some time earlier. At a stroke he undermined himself.

The team is no better than when he arrived and the England side has suffered its usual share of embarrassing results set against a background of ridiculously high expectations. The whole exercise has been a huge waste of money as he was allowed to bring in his own largely annonymous backroom staff who were also on ludicrously high wages. God knows how much it's all cost but please don't transfer it into his country's old money........it probably runs into billions of Lira !

Capello also managed to repeat the mistake that Sven made in not taking Darren Bent to the world cup or even giving him much of a chance despite him regularly scoring 20 goals a season in some of the most average Premier league sides.

The FA never learns and were quite happy to again send a manager off to a major competition knowing that even if he won it the next day he wasn't going to be in the job. That resulted in the bizarre selection of Theo Walcott in 2006 by Sven. The Swede didn't care by then and that was one of the by-products.

All the above is to say nothing of his unwillingness to learn the language although his command of the Queen's is probably still better than most of his charges !

The only good thing to emerge from his tenure is the exposure and experience that Stuart Pearce has gained. I hope that whoever gets the job next is merely keeping the seat warm for Psycho. I'm greatly impressed whenever he speaks and he won't put up with the behaviour and attitude of some of the lowlifes that have donned the white shirt in recent times.

Redknapp seems to be the favourite for the job although how his achievements merit that I don't know. Apart from being a cheeky wideboy who the media appear to adore it's hard to see what he'll bring to the party. Famously praised as being a great man manager he publicly slated and humiliated Bent with his infamous " Sandra " comment.....no suprise when Dazza left in acrimonious circumstances soon after.

His moves from Portsmouth to Southampton and back were very strange indeed.

Whoever gets the England job will need to be able to make a silk purse out of a sow's ear. However, I don't care too much to be honest given my feelings towards the majority of players that currently represent the national side. Until Pearce gets the job I'll not be taking a great deal of interest.
Posted by Phil at 21:59