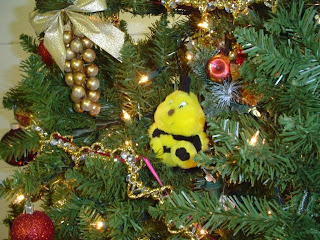 Having failed to beat the Lions and the Robins, Charlton couldn't beat the Bees yesterday. We're due to play the Saddlers on Saturday and unless I'm very much mistaken there's no creature called a Saddler and hopes of a win instantly rise as a result !

Griffin Park is a compact ground that has changed little in the 28 years since my last visit. A few pre-match beers in the cramped New Inn was good preparation for being quashed onto the terracing. Much like the aforementioned insect's abode of choice there aren't too many ways in and out. Simply knocking down a wall would allow quicker access and departure for away fans........perhaps they're hoping visiting Millwall fans will do it F.O.C. !

Surpirsingly the Bees failed to use the wings much..........small wonder the game never really took off eh ? Fortunately there was no sting in the tail. Bee jokes......can't beat them and it's no use droning about it.

Like a semi-denuded Christmas Tree, we were without many of our stars and some that remained were out of position. As a result and allied to fatigue from Saturday, prior to the game I was happy to take a point as I thought we were in for a tough game. In the end it was okay but three points would have been better.

I was surprised at Brentford's lack of ambition or urgency and towards the end the keeper seemed happy to time waste.

For me, this was a dull game that was only enlivened by the banter with the Family Guy ( you're not fit to be a dad - he didn't know how to Bee-have ) and the singing of a few CAFC classic songs from down the years.

Goodness knows if we'll get to play against Walsall on Saturday bearing in mind the weather forecast and their failure to play yesterday. It looked like some militant union had decided to take impromptu industrial action with a host of braziers all over over the pitch ! If it's a last minute cancellation like yesterday remember to take some chestnuts with you so the day's not entirely wasted !