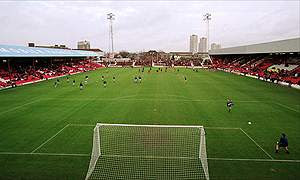 Note Two Of The Infamous Brentford Pylons Above

My trip to Griffin Park tomorrow has added excitement as Wikipedia has just informed me that tomorrow I'll be seeing the renowned " Brentford Pylons ". This is the only ground in the country, I'm told, that has a pylon in every corner !

My last trip to Brentford F C was in 1981, I think we won but am not too sure. I only remember Lawrie Madden being abused by one of our own fans and him stopping with the ball at his feet to see who it was ! Luckily he didn't find out and there wasn't a forerunner of Cantona at Palarse !

This was always going to be a tough game as the Brentford team of now bears little resemblence to that which visited the Valley early in the season. They have just renewed the loans of Szczesny and Balkestein.........I don't believe they're local lads whatever Wikipedia says ! Szczesny is a quality keeper who'll be hard to beat even for someone of Izale's ability ! However, I note he was injured yesterday for the " friendly " at Gillingham. We could do with him still being so tomorrow.

The Bees also have Bostock in their ranks and he's done well for them and will present a threat although I see he was on the bench yesterday but would expect him to get on if he doesn't start.

Charlie McDonald collected a red card and so won't be playing. I see that charm merchant Mark Stimson refused to shake Andy Scott's hand after the game......the season of good will to all men eh ?

Who knows what to expect after our recent games. Let's just keep all digits crossed and pray to God that we get something from the game.

Come on you Reds !