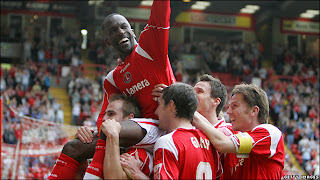 My favourite photo of Sir Chris.
﻿Saturday sees Sir Chris celebrate a year in charge of the Addicks and they say a week is a long time in politics ! Looking at him on the touchline and it seems like he's been there forever. It sure wouldn't be the same without him.
This is a small part of what I wrote a year ago when he was appointed :-
Views are mixed as to whether this just a populist appointment a la Keegan or Shearer or a sound one with an eye on the future with a promising manager with loads of potential.
I believe it's a great appointment. Not to have given Sir Chris the job now would have meant we might have never had him at all. To see him develop and do well at some other club would have hurt like hell. He knows our club, he cares about our club, he loves our club.
I feared we'd lost our chance to have him back at the Valley in any kind of coaching / managerial capacity. I'd have spent the rest of my life wondering like England and Brian Clough of what could have been.
He brings great promise and you can, as others have reasonably asked, whether that promise and love of our club is enough. Well it's not a bad starting point and having the fans, almost to a man, on your side is a real plus factor. The news of our new manager has got the club going again and I for one was dancing round the bathroom singing " Chrissy Powell. Chrissy Powell, etc " for some while. I'm feeling quite positive and the best I have for some time now about our club. Next Saturday's game against Plymouth can't come soon enough for me.
Hopefully Chris can use his connections and will be given cash to get some players in. Sir Chris was earmarked as a future manager of some quality by many some time ago when he was still with us. I'm happy that the right decision has been made. No one knows for sure of course but like I said before we won't die wondering.

Not sure why it was the bathroom I was dancing around in but hey ho I was happy eh ! Those who appointed him obviously saw the potential that I referred to and even if it does all go Pete Tong this season, I'll still love the man.

He started with four straight wins and in all fairness a couple of those owed a bit to luck but then all managers need some of that. Following that it was not a good finish as the season tapered off. I was concerned that the board might act in haste but to their credit they more than nailed their colours to the mast of SS Powell and it was full steam ahead and then some !

Virtually all the existing players were moved on as the Gaffer quickly went about recruiting his own players ( and I doubt he's stopped yet eh ! ). He's been able to get players with the right mentality and a desire to play football in the best way. A strong work and team ethic is very much at the heart of the squad and if there's been any dissention then it's not been apparent.

I believe that his superb man-management skills and his desire to treat everyone with respect has been integral to that. Sir Chris realised that he needed to get his players in early in order to get them to gel quickly. He's certainly achieved that.

His greatest triumph in player recruitment may well be Yann. What a difference that man has made. Another of the big plusses for the boss !

The recruitment of Alex Dyer is also an important one I would suggest. Not much is ever said of him but he, like Sir Chris, is held in high regard and it'd be easy to overlook him.

There was always a doubt that he would be too nice......not the sort of manager to throw tea-cups around as he openly admitted. However, you don't need to rant and rave. Sir Chris is calmness personified on the touchline ( and in the dressing room too I assume ) and I prefer my managers that way. I watched highlights of us v Palarse today, the one where we sent them down.......you may remember it. When Palarse took the lead there was Dowie going ape in the technical area......hmm didn't do much good did it ! No, I like my mangers cool, calm and collected thank you.

The boss has shown that he's not afraid to drop players if he thinks it's right. Some of those players will feel hard done by and for some I have some sympathy. However, I have to say that Sir Chris has usually got it spot on. His only achilles heel seems to have been Jason but he may be over that now. He did also slip up in dropping Solly against Stevenage but I can't see that being repeated anytime soon.

Those two are minor quibbles in Sir Chris's tenure. He's got us all proud and happy again with a team that plays football in the right way.

He has managed to turn things around in such a short space of time. Can he now go on and deliver promotion and then get us established in the Championship ? Hopefully the answer to that question is yes. I can't see why he shouldn't. The only concern is that if he develops as a manager in the way I strongly feel he will, can we keep him ? A lot of that will depend on how we progress and who comes calling.

I hope that I will be blogging in 10 years time on Sir Chris's tenth anniversary and reflecting on how Charlton have gone from strength to strength.