Charlton Steel Themselves For Another London Derby 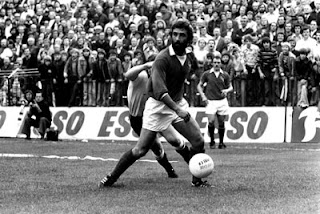 Killer - no doubt on his way to another goal !﻿
A return to cup action on Saturday and a cup tie away to Fulham. I was at Craven Cottage the last time we played Fulham in the cup, January 1981 in the fourth round. I remember it quite well not least for the goal that Killer scored......you'd be hard pushed to find many better than that ! Sadly that was in the days before all games were recorded and as far as I know there's no video of it.

I was right behind the goal. As I recall the ball came to him on the edge of the area and he controlled it and turned in one movement before firing into the top corner.........bl**dy fantastic !

I remember that after the game I was off to the Abbey National Christmas do, somewhat delayed obviously ! It was at the Inercontinental Hotel in central London as I recall. Incredibly the 3 course meal plus wine with disco entertainment cost me all of 50p ! The remaining cost was paid for by Abbey........the good old days ! I celebrated well that night !

My last visit to the Cottage was for a Prem game, not sure what season but we definitely lost but I do remember going to the White Horse in Parsons Green for some lovely ale. They were also cooking burgers outside and they were equally tasty. The website should you be interested is :- http://www.whitehorsesw6.com/

We played Ipswich away in the fifth round following the win at the Cottage, a game we lost 2-0 but we competed very well for a third tier side ( ultimately promoted of course ! ) against about the best team in the country at the time. I'm fairly sure Les Berry got a broken nose for his troubles with the old claret going everywhere. It was a brilliant day out and our boys didn't disgrace themselves. Upon return home I was drinking in the Duchess of Edinburgh in Welling after the game. That was very much my regular watering hole at the time despite living in Bexleyheath.

There are mixed emotions about the Saturday's tie. If you could guarantee that progress in the cup wouldn't affect our push for promotion then I'd bite you arm off. I seem to recall that a cup run nearly derailed Leeds efforts a couple of years ago and we wouldn't that.

Sir Chris has picked teams for the cup that are slightly changed but still quite strong usually with back up on the bench if needed. This game is different given the level of the oppo and the gaffer has said he'd like to give it a good go. I'm not going to attempt naming the side apart from sticking my neck and saying that I feel Sullivan will be in goal !

Sadly I'm not going on Saturday for various reasons. If you are going then I'm sure you'll have a great day amongst 7,000 fellow Addicks. You should make a hell of a noise and one that's bound to lift our players and leave none of them in any doubt that they are at a very special club.