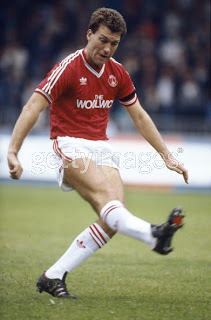 Charlton legend Peter Shirtliff, assistant to the Chief Barker﻿
The Shakers come calling to the Valley on Tuesday evening. Rochdale await on Saturday and they're not playing midweek and are on the upturn that usually accompanies a new manager. Therefore, the Bury game is one we really need to win.
Bury have established a win, lose sequence over the last 6 games and if you don't know I'm sure you can guess what they did on Saturday ! Yep, lost and to Rochdale ironically.
Richie Barker has done a good job in keeping Bury in the top ten for most of the season although Saturday's result saw them slip to 11th. Despite that they remain on the fringe of the play-off places. It must all be Shirtliff's influence surely !
In the third tier you expect to come up against a Sodje almost every other game and this is no exception as we welcome the bandana wearing Efte Sodje at the heart of the Shakers defence. I hope that BWP can give him the run around, from what I've seen Efte doesn't seem that mobile.........perhaps he needs more aerodynamic headwear ?
The other week saw a right old tiff between two of their players. Skipper Schumacher and Coke almost came to blows over who should take a penalty and both got booked as a result. What a to do eh ? Can you ever imagine two Charlton players ever losing it like that ?
Anyway the club say they've...er...buried their differences and all is well. The 3-0 reverse didn't go down well with boss and I hope we don't get the backlash from Barker's barking.
What of the Charlton side ? Good question, I'm glad you asked. Well, I feel we may see Dale " Shakin " Stephens ( moniker for this match only you understand ) return. I really hope that we witness at least 20 minutes of Haynes. I do like the look of him. Other than that I feel the same side and indeed squad will be named by Sir Chris.
I had intended to drive down tomorrow but foolishly I overlooked the game when I arranged an Olympic meeting. Don't get excited, I'm not meeting Seb or Boris........just me, the deputy head and some other teachers planning sports and curricular activities related to the games. My mind will be focused on just when I can get away so I'll probably deserve a gold medal for talking quickly and will agree to many actions just to get to the finish line. Anyway all this waffle is to say that as a result I need to get the train or I'll not make kick off. I'm praying against ( rather than for ! ) a failed Virgin that would mean I don't get there !
A win tomorrow would make me a little more relaxed about Saturday's game. It's going to be freezing tomorrow so I think I'll be well wrapped up and hope that the lads can make forget about the cold with a superb display.
Come On You Reds !
﻿
Posted by Phil at 17:48