The Artist Formerly Known As Bescot 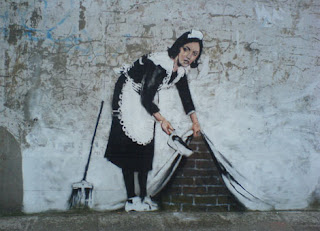 One of Bescot's Iconic Works

I often wonder where I'd be these days without wikipedia............a lot less well informed and no mistake !

It appears that a former resident of the Walsall suburb of Bescot became well known as a graffitti artist. Wishing to conceal his true identity he became known simply as " Bescot ". That was until he moved to London near the banks of the River Thames and then acquired the monicker " Banksy ".

His work was already well known to the good people of Wasall who had called their local football team's ground, The Bescot Stadium, in honour of the man himself. Naturally once he'd changed his name to Banksy there was little else for them to do other than follow suit with their football ground.

Unfortunately, the new name was relayed to a firm of sign writers over the phone.....oh dear ! This led to some confusion with the result that the new stadium was called The Banks's Stadium. Never mind, it remains as a tribute to Bescot / Banksy, the artist of graffitti (" is that the Italian lad ? "  " No Trig ! " ).

Grabbing at any tenuous links to Only Fools and Horses it appears that Jack Frost may play his part tomorrow in the postponment of this game. Let's hope not and that the groundstaff of Walsall have been able to employ something a little more in keeping with modern methods than a bunch of braziers ( wonder what the collective noun is for that ? ) to keep the pitch playable.

Chris Hutchings has just recruited one of the stars of this year's pantomime, Jack and The Beanstalk, from the Walsall Rep Company. The giant, as played by Clayton McDonald, may well be on the bench..... " Fe Fi Fo Fum, I play football near Birmingham ! ".

Let's hope that the game does go ahead, that Deon is fit to play and we go home with the 3 points.