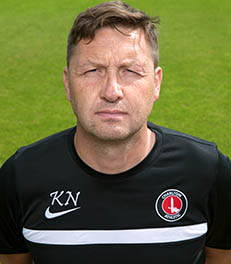 It’s been a relatively quiet week in S.E. 7 although it’s not been totally without an egg on the face moment for the club’s management team.

Kevin Nugent was nominated for the League 1 manager on the month. Hmm can’t be many managers who that happens to only for them to no longer be in charge. It’s not as though he’s taken up a post elsewhere.

How long did we endure the previous interim ? It would be funny if it weren’t so sad. Still lessons have been learned eh ?

The only lesson I think these goons have learned is that  they’ve noticed in Katrien’s case she says it best when she says nothing at all !

I’m sure the PR company is having an effect. A new manager has been installed and she was nowhere to be seen. In fact, as far as I can see she’s not even commented on the appointment and certainly not the process.

Katrien has virtually retired from public life. Even comment on the links to the child abuse scandal was issued as a club ( or cloob ) statement.

Don’t get me wrong I’ve no real desire to hear from her but what is she doing I wonder ? After all she is supposed to be running the show and that means more than just being filmed pre-match in the tunnel sharing a joke with the latest stooge !

A less than thrilling goalless draw in the cup last week and as we now know no big game awaiting in Round 3 even if we do overcome Robinson’s former team.

Saturday sees a trip oop North to take on the former charges of another ex-Charlton manager.

City are 4th and are unbeaten at home in the league so this will be a tough test. Hopefully having had to play on Wednesday in the prestige Check-A-Trade pot will have taken something out them.

Robinson has had a further week with his team and whilst I appreciate that he might cite the fact that he hasn’t got his own players in yet - he needs to deliver. After all, talk is cheap and a certain manager of the month nominee managed to get results with the self-same squad.