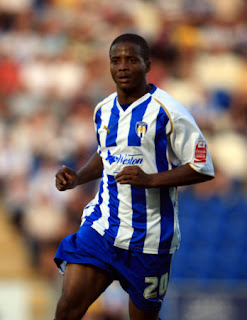 " Young Kevin " saw red last night
What would Curbs say ? It never happened under his tutelage ! " Young Kevin sent off ? Surely Not ? " I'm afraid so Curbs. Who'd have thought ? And The Peter Pan of CAFC is now 32 and ought to know better ! Especially tangling with old Bailey ( age somewhat younger ), tsk ! tsk !

That someone was sent off is no surprise, that it was SKL, well that is a surprise ! What a horrible football team Colchester are in every sense. I'm hoping that my neck brace will be able to come off in the next couple of days ! If we end up in the play offs let's pray to God that we don't get them..............another 180 minutes and maybe more of that.......arghhhhhh !!!!!

Never mind, we triumphed and that's all that matters. Akpo started......hooray ! He won a few aerial battles but sadly his finishing left a lot to be desired. Still it was better than watch Forster struggle on his own up front. At last Parky saw the light !

Now then what of midfield ? Well, I don't think Bailey had a good game and clearly left hand side of midfield isn't his bag and we all know that. The numbers of times he got the ball and it was crying out for a left footed cross and clearly he can't deliver that. We lose something as an attacking threat.

More important games are coming up and Parky needs to make a decision. Either he changes the formation or he leaves one of Bailey, Racon or Semedo out of the side. Our two wingers must start every time. Perhpas if Borrowdale isn't replced then he might think about 3-5-2 ? I can but hope !

As Ketts has pointed out the only downside last night was the big election or rather lack of it ! Where were all those " volunteers " ? I've not voted and trust they'll be there on Saturday I don't want to be dis-enfranchised !

Now we can look forward to Saturday with more hope than we might have done a couple of weeks ago. A spirited performance from the lads last night and Norwich suffering last minute nerves it seems all add to the mix.
Posted by Phil at 15:24