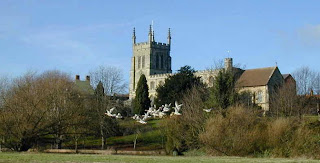 Newport Pagnell - more than just a motorway service station
Yes, tomorrow I can sing that little ditty to myself ! The shortest trip of the season for me in a game we need to win for many reasons. Personally we need to avoid defeat as the kids in my school will give me stick ( I don't want to be bullied ! ). Mind you given the Easter holidays at least that's two weeks away and they may have forgotten by then !

It's unclear whether Bailey or Burton will be fit and I don't expect we'll know that until we see the players warming up prior to the game. As I've said before I'd leave Bailey out of the starting eleven tomorrow as Racon and Semedo seemed to have a good game last week and Bailey's not been great of late. Just because you're skipper doesn't mean that you should automatically play although, as captain, that's not something I'll be applying to my cricket team this season of course !

Don't expect too much by way of an atmosphere tomorrow. As is the way with a number of clubs the Dons feel it necessary to play music when they score. I've never liked that, the cheering of the crowd is what you want to hear, it's not ice hockey. I'm glad we quickly gave up on that when we did it a few years ago.

Hopefully a good away following can get behind the team and the players will respond with a decent performance. This is a game we really should win. I think we need to take the lead and then seek to press home the advantage. If they go one up then I can only see us getting a draw at best.

I'll need to be very observant tomorrow as Ketts has kindly invited me to judge the man of the match. Unless I have a  " road to Damascus moment " on the way to the ground it's unlikely to be Mooney however much runnning he does ( allegedly ) !