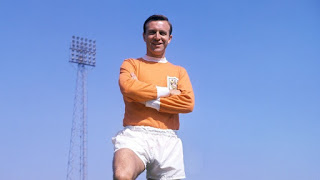 Joint planned demonstrations scheduled for Saturday against awful owners have, quite rightly, been abandoned in order to allow for tributes to be paid to Blackpool legend, Jimmy Armfield.

He spent his entire career at Blackpool and played over 40 times for England being unlucky to miss out playing in the 66 World Cup matches due to injury.

After his playing days he managed both Bolton and Leeds.

Sadly, I never saw him play but enjoyed his observations and co-commentary on the radio. He was, I believe, a real gentleman. His life and career will quite correctly be celebrated and remembered on Saturday. He will be greatly missed.

The Addicks travel to Bloomfield Road on the back of 3 straight wins so ought to be in good spirit. The return of Fosu, the emergence of Mavididi since his second spell with us and the arrival this week of the highly rated Zyro with us gives cause for optimism.

The squad now has real attacking flair and probably enough to mask the striking deficiencies of Magennis. Surely there has to be a possibility that Josh won't actually be in the starting eleven in at least one of the next few games ? There must be some chance ? No ? Oh well, it was just a thought !

There remains a question mark over our defence of course. We still look extremely vulnerable at set pieces in particular but in general to be fair. We need to tighten up or perhaps have better formation that doesn't leave us so exposed against quick counter-attacking teams. We are frequently caught out and teams that are better able to convert their chances will leave us hoping in true " Vindaloo " style to " score one more than you ! ",

I don't see Robinson changing his approach to games ( or team selection too much - see Magennis above ! ). Therefore, if we are to be successful ( and we really ought to be in the next few games ) then we need more speed, greater movement and earlier balls into the box.

It remains to be seen whether Robinson can deliver that. For me I find a certain irony in this view that Robinson plays attacking football. How often have scored more than two goals this season ? Without checking I'm not sure but it took until last Saturday for the Heineken offer to be cashed in so to speak.

Overlooking all that as I said earlier on we now possess some exciting players who appear to have goals in them. Hopefully they will provide both them and some football to whet the appetite.

If Robinson can't at least secure 6th spot barring any extenuating circumstances ( automatic spots are beyond us no matter what the manager says and he would wouldn't he ) then he has failed us as aside from Wigan and Blackburn there's no team that ought to be better than us.

That would leave us looking to next season and trying get out of a third tier that potentially contains Birmingham, Sunderland, Hull and or Bolton to name but four ! There are two or three similarly big clubs that might yet go down.

Let's hope that doesn't come pass and in the meantime focus on Saturday where our fans can pay tribute to a wonderful football man who graced the game both on and off the pitch. Hopefully we can leave with the 3 points too.