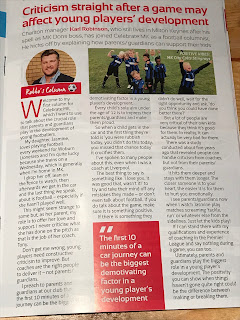 There's no escape ! Robinson has written an article for a Milton Keynes magazine. The remainder of it will be published in instalments over the next 18 months ! Obviously it's ok to criticise adult players immediately after a game without apparently having given it much thought !

Charlton are long time admirers of James Henry seemingly chasing after him for about the last 5 transfer windows at least. Yesterday we got confirmation that we have given up chasing him ( or any other Oxford player making a late run ! ). Henry was horrid and took the game away from us.

At half time I felt we might pay for our missed first half opportunities. We had created some great chances but our failure to convert ultimately cost us.

Oxford lost Wes Thomas due to an injury sustained in the warm up and he was replaced in the starting eleven by Obika. Ultimately he too succumbed to injury and the U's had to resort to Napa ( see what I did there ! ).

Robinson clearly has his favourites and those that aren't. JFC and Aribo being two examples. Joe has been in fine form but was left out yesterday. JFC doesn't do anything that Aribo can't ( apart from stop when clean through on goal of course ) and didn't deserve to start ahead of him.

Bizarrely he was one of only two players the manager identified for praise afterwards. He rubbished the rest of the team whilst singling out one player whom he didn't name but I assume wasn't getting a lift home from Robinson ( a reference to his article above ).

Marshall shouldn't have started either and certainly oughtn't to have featured in the second half. However, Robinson decided that the player he described in midweek as sensational should contiue. Indecisive only starts to cover how he played. At one point he turned this way and that going nowhere before conceding a throw in as yet another attack broke down.

Never mind the poor team selection yet again Robinson's lack of ability in respect of game management was cruelly exposed. Marshall should have been removed at half time at the latest.

Having restored the lead at 2-1 the manager needed to make decisions regarding the subs. Clearly he got it wrong again. Robinson shouldn't be making basic mistakes but he repeatedly does and never learns or apologises for them. Instead he bangs on about how they spoke at length in training about tracking players.

Really ? Maybe he did but two of their three goals were almost identical and for the first, the defence backed off allowing Henry to shoot unchallenged.

In addition to the above we don't seem to carry any threat at set pieces. At free kicks we don't appear to have a scooby what we want to do. No clever routine or even a direct strike at goal.

Our corners were awful although they were clearing the first defender this week ! However, they were floated in with no pace leaving anyone who might get on the end of it needing to generate all the power.

Oxford always carried a threat and the way we were opened up in the first minute was a portent of things to come. After they equalised for the second time I don't really think it came as any great surprise to anyone that they went on to get the winner.

All of us want to get out of this wretched league and we ought to secure a play-off spot but we're making really hard work of it. Let's not use the ongoing potential sale of the club as an excuse. I don't believe it makes any real difference to the players.

Robinson has his two players for each position now as a well publicised graphic illustrates and with some exciting attacking players in particular he now has no excuse if he doesn't at least deliver a play off place.

Potential new owners will doubtless be thinking the same and when looking at games like yesterday's might decide the person deserving of criticism is the MK resident in chief ultimately deciding he's not up to the task.

Time will tell but he can't afford too many more performances like yesterday or he'll find he has a lot more time to devote to local journalism. None of us other MK residents deserves that !