Footie On The Telly ! 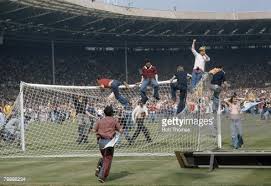 The Addicks go into Saturday’s televisual feast having not tasted defeat in 6 games ( cups and league over 90 minutes ) and not since 1st October in league games. It can been said there is a modicum of momentum albeit that this has been gained against some lesser teams, Scunthorpe aside.

Any Addick who’s been around the block a few times will tell you that you can never be optimistic ahead of any game and there are 2 good reasons why this is especially so for Swindon away.

Therefore, the omens are not good. However, in the face of adversity and all that and The Robins haven’t been pulling up any trees ( no surprise really as they’d be homeless if they did eh ! ).

Let’s hope we can get something and then build on that with home wins. It’s a big ask as Slade’s negative and dull football doesn’t give one any real cause for optimism. Over 50 years of supporting the club hasn’t quite extinguished my hopefulness so I shall watch with the attitude of a glass half full.

Meanwhile tonight we witness an international fixture that was a massive game when I were a lad ! England v Scotland was one of the few live televised games back in the day. There was a real sense of anticipation as it was the climax of the Home Internationals. That’s a traditional tournament that is sadly missed but these days players play so many games that it simply can’t be fitted into the calendar.

This is the calendar that is overloaded by more important ( some might say lucrative ) pre-season and mid-season games in the Far East etc. Of course, one is sympathetic to the financial needs of both players and clubs as they scrape an existence hand to mouth such is the dearth of money at the top end of the game.

Realistically tonight’s game carries less significance than days of old despite being a World Cup qualifier. Neither team is likely to do well even if they get to the finals. England play some awful football as they labour to overcome the apparent minnows of the football world ( a group that we’re surely a prominent member of ). 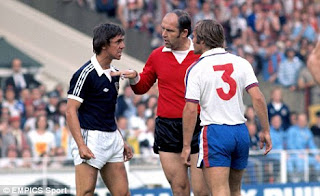 These games used to be good as there was real passion and meaning to them. In addition, loads of Scottish players played in the top flight in England. Goalkeepers aside, they were by and large quality players ( exhibit A – Denis Law ).

That’s not to say I expect England to win tonight, far from it, I’ll not be at all surprised to see Scotland win. If they do perhaps some fans will celebrate in Chris Powell’s Hillsborough style !