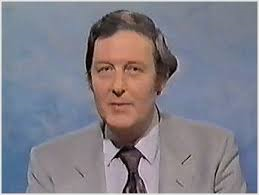 here he is the wonderful Bob Wellings !

The much missed Bob Wellings ( Nationwide’s finest ! ) was once left to wrap up the programme after Fanny Craddock had been making ringed doughnuts. Bob closed with the immortal words “ And may all your doughnuts look like Fanny’s ! “.

Back in formative years half time scores in other matches were gleaned from matching letters by the corner of pitch to games listed in the programme. Full time scores weren’t given out. Marconi had just produced the goods and you needed your transistor or the Evening News which printed all the scores quite quickly considering.

During the week typically any info concerning Charlton would be revealed from the local paper. Much as now we received little national coverage. To an extent the programme would be a good source of information containing information that you pretty much weren’t aware of.

In the present day programmes are pretty much redundant with so much news and info available elsewhere. I have about 15 years worth of programmes at home but long stop buying them for the aforementioned reason. They are really only worth purchasing now for special occasions of big matches or perhaps at the beginning or end of the season.

In terms of T.V. exposure whilst we’d regularly appeared on The Big Match ( LWT version usually with commentary from the excellent Brian Moore ) us on MOTD was as rare as rocking horse s**t ! These days of course we’re more than happy not to be on the magic lantern as it’s a bad omen given our few successes achieved in front of the cameras.

Over the years there followed Clubcall which was expensive and hardly contained any startling revelations or breaking news. It also went on for some time and at the end you’d wonder why you bothered but it never stopped me calling regularly or listening right to the end in case I missed some nugget of news !

After I moved away, Charlton Live came into being and when I was in town on a Sunday I try and catch a bit of it whilst being jealous of those that got reception that sadly never extended to Milton Keynes ! Nowadays of course one can listen to the podcast and thus nothing of the show is missed.

Other information is gleaned from Facebook, Twitter and blogs. All of these give you instant information and so too the views of others fans as well feedback on games etc. Some accounts will even let you know of any upcoming flash protest………….you don’t get that on the club’s website !

My routine for checking on news is done several times a day usually in a set order :- Doctor Kish, other blogs not linked to that, Twitter and then Facebook. It’s very rare that I refer to the Club’s website.

These other sources have usually been carrying rumours or news for some time and when the club announces anything it is usually the internet equivalent of chip paper.

Thus on transfer deadline day I pretty much knew Fanni was upon us before it became official. It’s the name that launched a thousand quips with most of them written and published before his signature had dried on his contract.

We’ve all had a little chuckle at most of them but somewhere Bob Wellings is laughing loudest safe in the knowledge that his own “ bon mot “ is unlikely to be bettered.