Live At The Valley ! 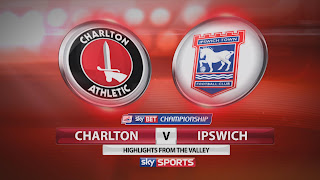 Another Saturday is spoiled by the kick off moving from the traditional 3pm…arghh ! I don’t like it but will just leave that there whilst my blood pressure is still manageable.

Live on telly and we all know what that usually means. Let’s hope that on this occasion we might defy the odds and at least avoid a defeat.

Ipswich always have teams that compete in the top half and under Myopic Mick they can usually expect to be challenging for a play-off spot. They are a fairly stable club who’ve had only 10 managers in the last 46 years. We of course, are going for 46 managers in 10 years !

They’ve been inconsistent this season which explains their position just outside the play-off places. In the last 8 league games they’ve won 2, drawn 4 and lost 2. They have only once scored more than twice in a league game and that came in a 5-2 demolition of Rotherham. On the flip side they don’t concede many but hey, we’d take a 1-0 any day of the week !

In a complete reversal of fortunes we have, of course, won our last two games. If we do complete a hat-trick of wins on Saturday then it’ll be surprise given the presence of the Sky cameras.

One obviously points to Skip as the main catalyst for our upturn but looking past him and the change in formation they are a couple of others who deserve some recognition.

Diarra has clearly impressed since moving up into midfield. That has been aided by the vast improvement in Narby Sarr. One must also acknowledge the emergence of Lookman and Holmes-Dennis. These two have shown great promise and their performances belie their tender age.

JBG is obviously enjoying somewhat of a freer role that allows him a greater impact.

The return of Henderson with all his experience and organisational nous makes such a difference and instils a greater confidence in the back four. Good to see him have an early word with young Tareiq last week following an early blip from the young man.

Tareiq’s excellent performances and the rather poor ones of Fox ought to mean that Tareiq retains his place in the side. I don’t think Fox can complain albeit that he had a better game against Birmingham.

All of the above has helped to secure those last two results. However, it must be said that a large of any success from the new system and change in personnel will only last as long as injury or suspension allows or possibly we’re required to produce a Plan B……..that will be the real test.

Sadly, I can’t agree with Karel when he says we have a good enough squad. I think the rest of us are clear that it could use some more quality and depth. I find it hard to believe that he really meant that. The absence of just one or more of those players who are integral to our current system will really put us at a disadvantage.

As ever more transparency is needed especially surrounding the departure of Watt. I understand that the club may not want to say if he’s been a disruptive figure as has been alleged in some quarters. To suggest that he moved purely to get fit is an insult to our intelligence.

Any player, especially one of your better ones recovers from “ injury “, gets fit and then fights to regain his place in the side. It really is that simple anything else particularly given our league position suggests something else and that benefits no one.

We need to get behind Skip and the lads. It’s to be hoped that the planned protests don’t have a negative impact on them. They shouldn’t because they’re not designed to do so.

Let’s hope our earlier than usual journeys to The Valley can be rewarded with 3 points. A good display too would be a bonus !