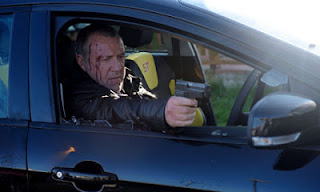 I went to the movies, the flicks or as we used to say, the pictures, on Tuesday night. I saw The Sweeney which I thought was pretty good. Bugger the critics. Never read a review and pay too much attention to it, go see for yourself. I don't care if that makes some kind of easy to please nonce but after all, I like watching Charlton so the bar's not set very high !

We were one down before I taken my cinema seat and I got a text telling me we were two down before Pearl and Dean were done. As I was watching Plan B, Sir Chris was working on his. I have to say young Ben met with more success !

Although we seemingly didn't play well for the first hour or so, we came back into the game and you know your luck's against when you have yet another goal chalked off for offside and are on the wrong end of a soft penalty. Throw in Stephens's suicidal back pass ( well he wanted to be a Villan ) and you've little chance of getting anything from the game.

Onto Saturday and our basement battle away to Ipswich. This term Sir Chris has reminded me of our first season in the Prem when Curbs remained steadfastly loyal to a few players who'd been instrumental in promotion. Indeed, Curbs in his autobiography remarked on how it had been a mistake to do so. Ilic stands out as a classic example of that.

The need to change the midfield ( to a greater extent than bringing Green into it ) has been there for all to see for some time. It should have happened on Tuesday at the latest. The additional delay in starting Fuller also stands out like a sore thumb. He is a class above just about anyone else we have and we do create chances when he plays.

At last we added width from the start in the shape of Green who has returned refreshed and looking the business. I feel we need to add Kerkar in the midfield. He looks good to me. We've just got to find the right balance, whatever that might be but it certainly isn't with the present incumbents.

I've always believed in playing players in their strongest position and the loss of your first choice left back shouldn't be compounded be losing your first one on the right by playing him on the left. It doesn't make sense to me especially when a fairly decent left back is available. Evina may not be everyone's cup of tea but he's looked ok to me and as I said, why suffer a self imposed double whammy !

Sir Chris needs to make some changes ahead of Saturday and I do so hope that a few reinforcements come in although I've no idea how likely that is. All the players need to feel under pressure to perform to hold onto their place. We've already seen the impact it can have in the shape of Green's return looking a lot better than I remember towards the end of last season.

This season is a real learning curve for all concerned and I never felt we'd do much else other than struggle given how little quality or experience was brought in over the close season. We can finish in about mid-table given a couple of decent additions. The side doesn't lack character. At the start of the season it didn't lack self-belief either, however, defeats can change that of course.

As I've remarked before Sir Chris is too intelligent not to learn lessons and do the right thing. Like any other manager, he needs backing in terms of resources and if some stories are to be believed he hasn't been able to bring in the players he wanted.

Moreover, Sir Chris needs support from us and even if we continue to struggle and stay in the bottom three I believe he should remain as manager. It would be foolish to sack him as he possesses too much potential. I remember that doubters that would have had him out the door at the end of his first incomplete season. They were wrong then and they'd be wrong now or at any time this season.

Let's hope that the lads can set us back on the right path with a win at Portman Road on Saturday.