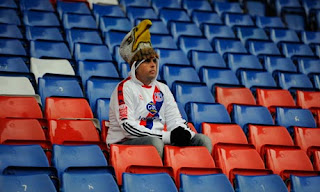 by sending 3,217 of these over to The Valley for a match televised live. Even though we won't have sold them many programmes, all the other revenue is most welcome. Thanks very much.

I suppose after 44 years the Nigels had to win a league game at our place some time. I hope I'm still around in 2056 should it ever happen again.

It was galling to see Lennie go and sit in their dugout ( I beleive that's what their fans were chanting recently until they beat Wednesday ).

We struggled to get a foothold in the first half but the last third of that saw us come into the game more. What opportunities Palarse ended up in Row Z courtesy of some geezer who clearly can't shoot with any accuracy........never stopped him trying though.

Sir Chris used the subs well and they were positive moves. BWP's effort shouldn't have been disallowed but to be fair the lino would have done really well to spot the lump on the floor playing him on.

It was a terrific effort to try and get back on level and it was a real shame that Hamer's header didn't go in. All credit to the lads for putting them under sustained pressure towards the end.

There are worries over the Wiggins injury, it didn't look good. Skip being rather ineffectual and getting subbed is a concern as it pretty much the make up of our midfield. It does need addressing. We can't keep playing without any natural wide men. Green looked good when he came on and probably deserves a go.

BWP did okay given the limited service that he and Yann received in the first period. However, when one witnesses the impact that Fuller has again then you've got to think the guy should start harsh as that may seem on Bradley.

Wilson acquitted himself ok and delivered a couple of quality crosses.

No time to dwell on last night and we must now focus on Tuesday night at Derby. It'll be tough of course but an early opportunity to bounce back.