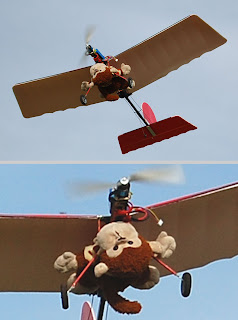 Pilots returning their planes to the monkey hangar.........
I'll admit that our nickname is a little contrived as I don't think discovering a haddock dressed up as a footballer in S.E. 7 is all that plausible but a monkey dressed as a Frenchman ? No wonder The Archbishop of Canterbury won't ever go to Hartlepool, well if you're the primate of all England..........

Another away trip and one of the longest, let's hope it's worth it. Hartlepool had a good start at home early doors but since September they've lost 3 at home including a midweek defeat. It should be a good time to play them but...............this is Charlton !

I understand that Hughes played ok on Tuesday albeit being more effective in his defensive duties and I would now expect Stephens to return. It is to be hoped that he returns refreshed and puts on a performance more in keeping with that of early season.

I'd not expect any others changes baring injuries and we can hope that Yann's blossoming partnership with BWP yields yet more goals. Hopefully can score early again and in addition, give ourselves a cushion of more than 2 goals but I'll settle for a win by whatever margin.

Our defence is the meanest in the league along with Tranmere in only conceding 12 goals. Long may that continue and hopefully we'll keep a clean sheet tomorrow.

All the best to all those making the long trip north. I'll be at Franklin's Gradens watching the Saints v Newcastle whilst having half an eye on matters further up the country.