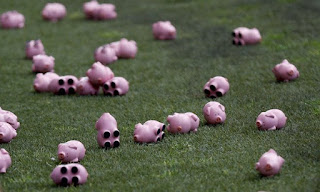 Porkies ! Thousands of them ! Seems very apt in every way under this regime.

The pre-match meeting between some fans and the SMT witnessed a few more I understand. It appears that Kevin Foley has settled in so well that he is now a member of the SMT as he was also present. Someone had to fill Johnnie’s place I guess.

Katrien again failed to answers questions and Tony appeared keen to change the subject whilst still managing to put his foot in it.

If these meetings are genuinely intended to be an attempt to understand fans anger and suggest what the future plans are, then they’re simply not working.

I’d love to be at one. I’d ask Katrien what objectives Roland set her last year. I’d also ask about this year and I’d want to know what the consequences of her not meeting them are.

Either she’s not set any, they are so vague as to be meaningless or there’s no consequence of failure.

None of these meetings is filmed and no genuine account or record is forthcoming from the club. So much for an open approach and a willingness to put things right.

Details of the march and flying pigs are covered in great detail by others and all will now be aware of that. In addition, the rather worrying alleged assault of a young man who had the audacity to wave a flag.

Awareness raised in all forms of media and both sets of fans will be pleased that for a short while at least their plights have been highlighted. Whether it helps achieve the ultimate goal of ridding ourselves of Roland and co is open to debate of course.

However, it’s got to be better than doing nothing. Sitting on your hands accepting it all really oughtn’t to be an option. One can’t simply allow them to carry on unimpeded.

I still don’t understand Roland’s raison d’etre. Surely he is now simply holding on just hoping to at least get his money back. Unlikely I’d say but it won’t stop him trying it seems.

On the pitch the scoreline flatters an average performance against a poor team devoid of confidence but that still could have taken a share of the spoils at least.

Novak was a big disappointment for me. Little effort and too quick to moan at others seemingly in an attempt to cover his own shortcomings.

Our subs were odd and I was dismayed to see Hanlan come on to play on the right side of midfield.

A win’s a win I guess and I’d like to think we’ll kick on from here but I can’t really see it. Hopefully I’m wrong.

The omens at least are good as tomorrow night we play Pork Vale.
Posted by Phil at 11:58