Back In The Game ! 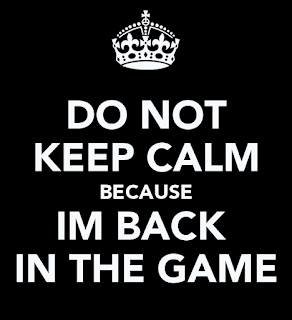 After a hiatus of over 4 months ANEM is back ! I can hear the collective cheer already !

Moving house at the end of March added to a delay in getting broadband sorted all took its toll and by the time it had all completed so had the season pretty much. However, finally the old laptop has been dusted down and we're off again !

If you're expecting insight, thoughtful and witty observations then you've clearly not read this blog before. Sadly its the same old, same old !

I returned on Friday from a holiday in Tenerife ( more of which later in the week ) just in time for the QPR game. I was tinged with guilt for leaving " her indoors " to sort do all the unpacking but she understands life's priorities !

Like many others my pre-match plans had to be changed as a result of the season ticket fiasco. However, once at the ground they were quickly resolved and I was soon in the Oak's beer garden lapping up both sun and ale.

It was clear to see that more work has been done inside the ground although as with the Hammers friendly I thought the pitch looked better last season. The new screen is an improvement but like many others I miss not having both teams listed. Surely this can be added in some way ?

QPR fans were full of arrogance and more and it made Saturday's result all the more satisfying. I felt last season that Rangers made a mistake in appointing Ramsey when they clearly needed someone with experience to escape the position they were in. Similarly a club like Rangers is not one at which to learn your trade.

Clearly Ramsey does have some learning to do. The tetchy Mackie got no change from Solly all afternoon and never once did the QPR boss consider switching him to the opposite flank. Surely that's a basic tactic in that scenario.

In addition, post match and Ramsey admitted that Austin will be off soon. That was apparent from the way he played and all things considered why play him then ? Surely it made better sense to start someone who'll be there all season.

Lessons to be learned and he could do worse than look at the Addicks boss. He played it dead right with Watt. If the young Scot was out of order then he was put firmly in his place. Luzon did exactly the right thing.

It's clear following the opening match that there's contrast in several positions. We are clearly overloaded with midfield players to the extent that something has to give between them all especially if James joins from Wolves.

We still need another central defender in my view but perhaps Luzon is happy with the main three plus Lennon. I can't see us getting one in before September 1st.

Another striker is necessary I feel particularly in view of Igor's ongoing injury problems. That'll probably be a wait and see approach with a view to a loan if needed.

I've been impressed with all the new additions and Pope went a long way to erasing some doubts I had about him with a very assured performance.

Post match was spent in Crossbars ( although perhaps it should be renamed " Crosswires " if a barmaid thinks you want a meat pie when asking for a London Pride ! ). It was more packed than ever and to be honest a bit of a mess. The problems are easily rectified by more competent staff and a greater number of them. A great number of people gave up and walked away which was a shame as upto then everyone was in a good mood.

Others not in a good late on Saturday night were those who settled down to watch the new football league show. What a pile of cack ! It's like someone has managed to turn Match magazine into a football programme. It was a farce from start to finish. I'll not be watching it again and will watch Sky's 72 programme instead.

Tomorrow's League/Worthington/Capital One/Milk Cup match against the Daggers should be good given the side we appear to be putting out. An opportunity for some fringe players and more likely starters to get some time under their belts.

Given what we've seen so far there's lots to look forward to. Like the players on Saturday......... it's good to be back !