Up For The Cup 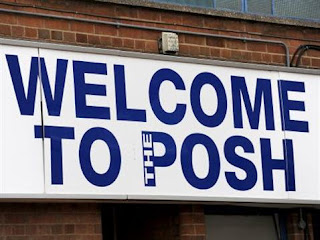 Another Tuesday and for the third successive week it's another away day albeit in the League Cup.

The lads will really be up against it as in Dave Robertson, The Posh have a manager who really knows his football. I say this because it was he who passed me for my Level 2 award back in 2006. I need say no more then eh !

Many decisions for Guy Luzon ahead of tonight's cup tie away to Peterborough. A hectic start to the season allied to several injuries mean The Addicks should be fielding rather more youngsters and fringe players than the manager would have ideally liked.

Given Charlton's better than expected start to the season the boss will also have an eye on Saturday's game away to Wolves. Thankfully they are also in League Cup action tonight so won't have any advantage in respect of being more rested.

There's an international break after the game at Molineux and despite the Addicks going well Luzon will be glad of the opportunity to hopefully get some players fit as well as to integrate any new signings should we get anyone in.

I've been to London Road on 3 occasions and have seen us win each time. Therefore, I'm sad to say that I won't be there tonight although I've never seen myself as bringing any luck to The Addicks.

I'd like to see us progress hopefully without further injury and then go on to draw a big Prem team at home in the next round.