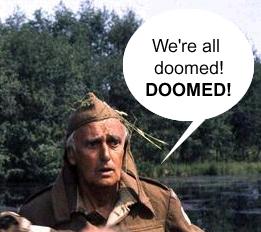 It seems that after Saturday's game following the Addicks is resembling Dad's Army. You're either in the Corporal Jones, Don't Panic camp or Private Frazier's, We're all Doomed !

I'm in the don't panic camp. If the defeats we've suffered this season were evenly spread out then we'd all be in that one.

The seeds for the two home defeats were sown after the Bournemouth game. At Dean Court we looked a very tired team and were a tad fortunate to come away with all 3 points. It wasn't entirely unmerited but it should have served as a warning that some players needed resting and there was a need to make greater use of the squad.

That message was intensified on Tuesday albeit with a better performance. Sir Chris's reluctance to make changes has bitten us on the bum. I've commented before on our refusal to make substitutions when the game / situation is crying out for it. On Saturday we made just the one enforced change. At half time I'd have  made two changes. I know we got back into it and that we should have got a penalty that might have left us at 3-4 with about 30 minutes to go. However, who knows what a double sub might have achieved.

Sir Chris, post-match, hinted at a degree of complacency and he's right and one might argue that his refusal to alter the starting eleven has helped to foster that situation. For the County game at least, BWP should have given way to Haynes and even in the light of young Danny's injury, disruption would have been minimalised.

Stephens certainly shouldn't have been a recent ever present with Russell ( my preference for the last two games ) or Pritchard or Hughes deserving of an opportunity.

A word or two on the ref. He was just awful and I'm not trying to pin our defeat on him ( if only ) just to say that he didn't help. If your serious about officiating, wishing to make a career out of it and one assumes with ambitions to progress then you don't turn out like that. He obviously passed all the relevant tests pre-season but is unlikely to pass Gregs now. I trust that he never refs another game for us.

I was very disappointed with those that left at half time. Hello ? This is Charlton, what do you expect ? I'd not leave if we were 4-0 down with 5 minutes to go. Maybe it's just me but I'd never want to miss anything and with a whole half to go you just never know !

Sir Chris has done such a fantastic job this season in almost every area both on and off the pitch. Aside from the obvious achievements, he's restored pride in the club for both players and fans. He's put players back in touch with the fans and kept their feet firmly on the ground. I'm sure he'll learn from the last few games, he's too intelligent not to.

A week's rest, Scunny playing tomorrow night, our boys playing better away from home are all things that point to us getting back on track on Saturday.