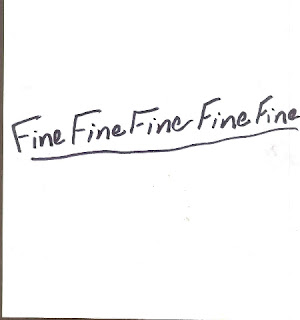 .....hyphenated words.﻿
In addition, there's a fine line between success and failure. That was brought into sharp focus at The Valley yesterday. 3 - 1 looks like a heavy defeat but we could easily have scored 5 or 6 ourselves. At 0-0 Abbott hit the bar, had that hit the underside and gone in then it's a different story. How do you legislate for Doherty being so poor and at fault for, in my view, both the 2nd and 3rd goals ? Why did our players mis-fire so spectularly in front of goal ? All that added to a keeper who made some great saves as well as giving us all a headache.

I think we'd have been better with 4-4-2 yesterday but it's hard to argue against Sir Chris when you look at what we created. I think we'd have done even better with Racon starting instead of McCormack or perhaps Reid on from the start and keeping Jackson in the middle. I though JJ got forward well and had some good chances himself. Central midfield does seem a better place for him.

Some will point to Sir Chris and blame him for the defeat yesterday but as I say it could all have been so different such is the nature of sport. Luck seems to have evened itself out as it always does. Aside from making one or two changes at half time or on 60 minutes as I felt we needed to I don't think we point the finger at the manager. The players had ample opportunity to score and Doherty was woeful.

Good to see a packed although we probably wont see it like that again for some time. Charlton have a way of killing the atmosphere eh. Having worked up the crowd with the tenor that got everyone singing we decide to play an interview with Sir Chris. Now I'd like to have heard that but just not at the moment. In any case you couldn't hear it.............not good any of that !

Sadly there was a fight just behind me in the East Stand. Very distressing for the children around it and all so unnecessary of course. Some kids were in tears. You do wonder what the job of a steward is. The one in front of us remained planted in his seat. Just what is he supposed to do other than sit and watch the crowd ?

The heavies eventually arrived after fellow supporters had managed to keep the two antagonists apart. Not a good advert for us. I've never seen that at the Valley before in recent times but I wonder how many children and their parents would believe anyone that said that doesn't happen every week ?

Young Jenkinson did well yesterday and offered us more defensively than Francis but even I have to admit we missed the crosses that Francis can provide. Cqn we merge them both into one player ?

For me it's not all doom and gloom and I'm not ready to write off Sir Chris, I think he knows what he's doing leaving aside the myopia as far as McCormack is concerned ! I'm still pleased and happy to have him as our manager. A couple of loan players would greatly help too and I'm sure the boss is looking at his options.
Posted by Phil at 09:35