" There has to be an element of control " 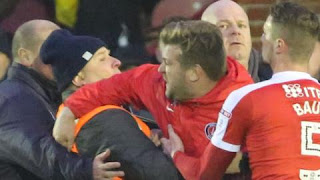 " I know it's about the fight and competing for survival in one of the most difficult leagues in Europe but there has to be an element of control ".

Most Addicks don't need telling or reminding who uttered those words nearly a year ago shortly before demanding that Sanago be banned for the rest of the season after collecting a red card for elbowing a Dons player. Sanogo apologised later - presumably he was wound up after the Dons player said something that didn't belong in any industry.

Regular readers of this blog will know I wasn't in football parlance, over the moon, when Robinson was appointed as our manager. I know most of us wanted a British manager ( although I would qualify that by saying we wanted a manager with proven success in the football leagues ) but that didn't mean that was the sole criteria.

To be clear that wasn't just because Robinson has a track record of rubbishing officials and seemingly blaming them for every defeat his teams suffer. Nor was it just because he talks a lot, in fact a hell of a lot without actually saying anything meaningful.

It wasn't just because his teams are set up to have a lot possession with that apparently being more important almost than scoring goals.

It was the whole package that led me to believe he wasn't at all suited to manage our club. I know we've had some less than wonderful gaffers in the last 3 years but none has quite dismayed me as much as the current incumbent.

Saturday's final whistle and events immediately following it confirmed that in no way has there been any change. His behaviour not only reflected badly on him but brought more embarrassment to our club.

No wonder we've had 3 red cards in successive games. Byrne's tackle last week didn't look good to me but Robinson saw fit to applaud him off the pitch and pat him on the back. Why endorse that ?

Where does Robinson go from here ? I fail to see how he can discipline any player for transgressing on the pitch. Maybe he'll refund Tex the fine he imposed after the Portuguese threw the ball at Morison. After all he suffered physical rather than verbal abuse that some would argue is worse.

Robinson has brought with him a whole lot of baggage that ranges from his dislike of officials and vice versa to other clubs supporters feeling the same way.

Let's be clear Robinson did cop a load of stick on Saturday and that banner was a step too far. Their point could have been better made without the use of the C word. However, he must have been expecting it and a lot of it would have been of his own making.

Wimbledon ought to be a  club with whom we have a great affinity given our respective histories. Sadly, Saturday will have done a deal of damage to any relationship. Let's hope it restricted to Robinson himself.

No doubt there are other clubs whose fans share a similar dislike of the man. Peterborough are probably one.

Some folk are keen to defend the manager citing his passion. Is this the same sort of passion that saw Rosler antagonise our fans last week or some Millwall fans behave the way they do ? Maybe those Robinson apologists believe they can selective in their definition of this " passion ".

Two games played in February and the main talking points arising are referees and a post-match altercation with a groundsman. That's probably just as well for Robinson otherwise we'd start to examine football matters and ask questions such as why we can have so much possession and not score more than one goal.

Why one of our best strikers is playing left mid ? Why he can't set his team up to play a system that doesn't involve one man up front ?

Why when apparently have so many good players including the latest Deli Alli are we floundering in mid-table ?

It seems the players do want to play for him despite all the off field nonsense and waffle and at present to me that's all Robinson has and needs to cling onto. However, more episodes like Saturday allied to poor results even his greatest advocate will desert him.

Since his appointment Robinson has been keen to tell us what a massive club we are and cites our history and tradition and how he is honoured to be our manager. All very good but with it comes a great deal of responsibility. He needs to ensure that his words and deeds match the rhetoric.

Time to clean up his act for as much as he likes a drink he won't want to be drinking in the last chance saloon too often.