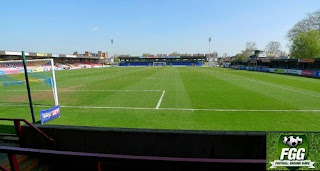 In pure football terms Saturday would appear to be a good time to Wimbledon. In meteorological terms it’s certainly not and it's unlikely the game will be played.

All the blame can be put on The Beast from The East and this time, the beast’s not called Roland !

The Dons had a good January but February has not been kind to them. They’ve played 7 games , winning only 1, losing 5 with one draw. Their form otherwise has been inconsistent at best and explains why they are towards the bottom of the league.

Our form has been a little better but not what you’d expect for a club with our squad and play-off aspirations. The injuries to JDS and Kashi will hardly help our cause but no one other than Robinson apologists would argue that we ought to be in a much better position. That anyone is blind to his short-comings that are increasingly exposed with each passing game is a mystery to me. It's not just DHL who are failing to deliver.

Robinson may have improved morale to a degree and be a slight improvement on the previous recent incumbents ( that's not saying a lot ) but we need someone who’s tactically astute and can motivate and organise players appropriately. In short, we need more than a cheerleader !

The manager made a long winded statement ( no, really ! ) praising virtually everyone connected with the club. Unbelievable was the oft repeated word. The same word he used to describe Shrewsbury after he watched them play before setting us up for a right old drubbing last Saturday.

The injury to JDS has implications beyond the mere fact the he won't be available for the next few games. It does mean that when we face Plymouth we won't be able to postpone the game due to having 3 or more international call ups.

That means the unthinkable and not playing Josh Magennis. Robinson will potentially have to think of another way of playing or at the very least try someone else up front. I'm looking forward to seeing how it pans out.

It could be amusing if not effective given that on Saturday he opted to move Aribo to left back on Saturday when JDS went off. There were many options available that were far more appropriate but the manager chose to ignore them all. On that basis replacing the ever-present Magennis should er.......interesting. What masterstroke can he come up with for that one !

Today's aforementioned clarion call was an odd move even for Robinson. Praise on the one hand for all and sundry whilst stating that Bowyer and Jackson don't have much experience in the role. A tough 12 months or so for him but how much has he learned and we're in a much better place.....he's been having lessons from La Meire it seems !

This is new territory for Robinson as he is seemingly getting his excuses in very early. It's not my fault guvnor, honest !

If The Addicks are to scrape into the playoffs we'll need a large percentage of wins from our remaining games. It all seemed highly unlikely before Saturday's potential postponement with further fixture congestion and injury loss. It appears even more unlikely now.

Unless the manager has a footballing road to Damascus moment it's really not going to happen and I wonder, with teams around us hitting form, just how low down the league we will go before season end.

* with apologies to EMF