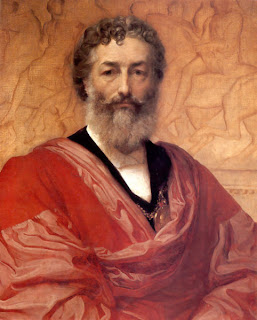 The great man himself - Frederic Leighton. This is a self-portrait, sadly not even Wikipedia has been able to identify the artist. 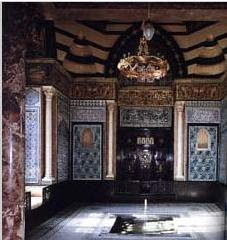 Leighton's Orient - Frederic was highly influenced by the East End. This is the Arab Hall, designed to display Leighton's priceless collection of over a thousand Islamic tiles, the interior evokes a compelling vision of the Orient.............poor attention to detail though as there's no sign of the Matchroom Stadium.

Amazing and if we're honest, we probably all thought there was no connection between culture and Friday's opponents. As ever, Wikipedia and some dogged research, proves otherwise. Poor old Fred died a day after being made a peer.............became a Lord and then met the Lord........heaven's above !

I think we can all write-off Tuesday's performance as a bad day at the office and focus on the league. To be honest most of us wanted out of that competition anyway, just not in the manner in happened. Thankfully Huddersfield won their game meaning they play midweek before we travel to meet them on the Saturday.

I'm going to the game on Friday as I did last year. It was a thoroughly enjoyable evening then. The result and in coming back from 1-0 behind was great and a few pre-match beers in the Birbeck Tavern ( on Langthorne Road ) helped make the evening. Good pub this with nice ales and a good beer garden.......well worth a visit if you've time.

The O's have a few players with Charlton connections not least Matt Spring. I guess Matt will be out to prove a point and so will be fired for it. Don't think they rested many players for their Carling Cup game in midweek so hopefully our boys will mostly be fresher.

I assume we'll have the same starting eleven as Saturday save for Semedo and Wagstaff. They're likely to be replaced by Racon and Martin respectively. Prior to Semedo's sending Parky may have thought have moving to 4-5-1 but that's all gone west now even if he was. I can't see he's got any real flexibility there.

I expect that this will be a tough game, however, with good away support and hopefully matching performance from the lads I think we're good for at least a point.