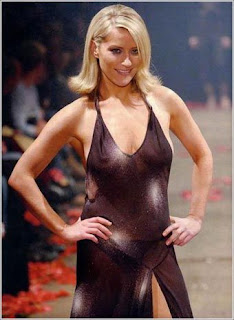 Zoe Lucker - famous fan of the Terriers
As you can tell I've been doing some research on famous Huddersfield Town supporters as evidenced by the photo above. There's nothing gratuitous about that I can assure you. Harold Wilson was a supporter too but do you know, I couldn't get a picture of him !

Despite Town playing in midweek this remains a tough game. Like the majority of fellow bloggers I'd be happy with a draw. Their main goal scoring threat comes in the form of Jordan Rhodes. In addition, the arrival of Alan Lee from Palarse makes it a certainty that he'll score given the law of sod.

Town are a good side and we'll need to be at our best. Certainly a vastly improved performance from last week is needed. The side is fairly perdictable barring injuries. Dailly in for Llera and Semedo in for Racon. I guess Wagstaff has earned another start but I'd like to think that Parky would consider putting Martin out right and getting another forward on if it's not working.

I had hoped we'd have strengthened the squad by now with everything done and dusted. Our squad remains painfully thin leaving little room to change things during a game. We do seem to be making hard work of getting these transfers sorted. I'm sure all are doing their best but as is ever the way with the Addicks it's going down to the wire eh ?

I do hope that Fortune signs up as I believe he'll be more than capable at this level and is a Charlton man after all. I've no idea if the much referenced Benson is any good but trust he's quicker on a football pitch than he is putting pen to paper.

I'm not doing so many away games this season for various reasons mainly but not purely financial. My absence tomorrow is down to cricket which I'd happily pass up if I could as it's meaningless match and it's not going to be 27 degrees in the shade ! Sadly I'm obligated meaning my first absence of the season.